Posted by Baking With Zombies on November 5, 2014 in Pie, Vodka Pie Crust | 20 Comments

Let me just tell you something. This pie crust is the best! It is the most spectacular pie crust EVER! I searched everywhere and tried so many different pie crust recipes and this one blows them all away. Thank you America’s Test Kitchen! Yes, this pie crust has Vodka in it.  While the water that you add to your pie crust helps the formation of gluten, vodka actually inhibits the formation of gluten. If you’re worried about the crust possibly getting you a little drunkety drunk, don’t. The alcohol bakes out and you are left with a delicious flaky (and I mean flaky), buttery, delicious, bomb-ass, righteous pie crust. Did I tell you how much I love this crust? Yeah. I guess I did.

A wise man once said, “There’s nothing beautiful about this world.”

He was wrong.  This pie crust is beautiful.

Some things to note about the ingredients used before we begin.  Use the highest quality flours, sugars and butter.  I prefer to use organic flour and sugar.  As for the butter, it is best to use unsalted European butter with a 84% or higher butterfat content.  My favorite butter was Straus Family Creamery European-Style Organic Unsalted Butter.

Another tip is that if you can have everything (including flour, sugar and utensils) cold – do it!  Put it all into the refrigerator before you start mixing. 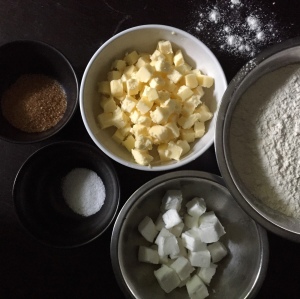 With a pastry blender, mix 1 1/2 cups flour, salt and sugar until combined.  Add butter and shortening until like cheese curds and nothing uncoated.  Add remaining cup of flour until pea sized. 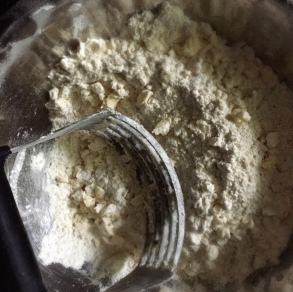 Sprinkle Vodka and water over the mixture and with a rubber spatula, use a folding motion to mix, pressing down on the dough until it is slightly tacky.

Divide the dough into two sections.  Roll into a ball and press down into a thick circular shape.  Wrap each section in plastic wrap and place in the refrigerator.  Let chill for at least two hours but it is best to remove after 24 hours.

When ready to use, flour surface and roll out by pushing the rolling pin over once, turning the dough slightly and rolling again until the dough is large enough to hang over the edge of the pie plate by one inch.

Before baking, lightly butter the surface of the pie plate and mold the pie dough to fit.  Place in the freezer for a minimum of 20 minutes.  After removing from the freezer and before placing the ingredients for the pie inside of the pie shell, be sure to poke holes into the pie bottom and sides.  Also, to hold moisture in, coat the entire pie dough with an egg wash. 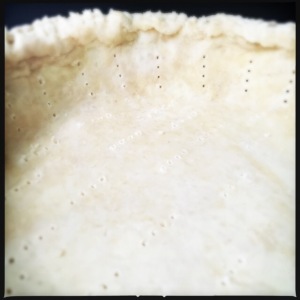